I was recently invited to be involved in a fantastic project, helping to make a promotional video for the release of the new LEGO Muppets Minifigures.

The task was to recreate the classic opening sequence from The Muppet Show, and my role, was to design and make a series of LEGO contraptions that would help animate the minifigures during the filming.

The main stage was made by a talented Set Designer called Jaina Minton, using card and other craft materials. The idea of the promotional film was to show off the new Muppets minifigures and also inspire kids, in a fun way, and encourage them to play with the minifigures in creative ways and maybe even have a go at making their own Muppet Theatre.

I was briefed to design 4 different mechanisms to open the stage curtains and enable the minifigure characters to walk on stage behind the classic arches, and lean, spin and twist, just like they do on the opening sequence of the Muppet show. I love to make moving designs with LEGO and really enjoy the creative problem solving process, so it was a dream commission for me to be involved with. I also made a few extra mechanisms just for fun to animate the members of the Muppets Band.

The filming took place in a studio down in London, so I took all my LEGO contraptions down on the train for a couple of days and had a brilliant time. It was a real insight in to just how much work goes in to putting a short promotional piece like this. As well as me and Jaina, there was a full crew of talented folks operating the amazing cameras and light, directing and editing. The Director was Will Tribble, who really embraced his inner child and got stuck into the shoot, and the Director of Photography was George Burt who bought with him a huge array of amazing equipment.

I met some lovely people and very much hope that I will be invited to help out with more projects like this in the future. After the shoot, I decided to make a little display frame to house the Muppets Minifigures. I’ve put step by step instructions below if you would like to have a go at building one yourself.  Simply click here to download instructions to build your own Muppets Minifigure Frame. 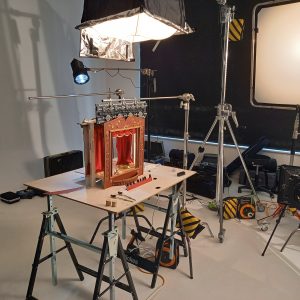 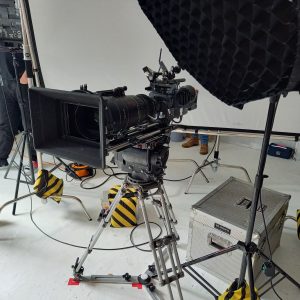 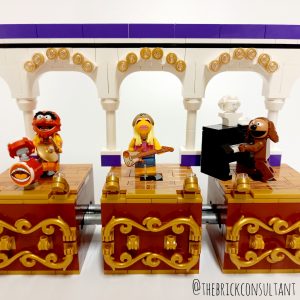 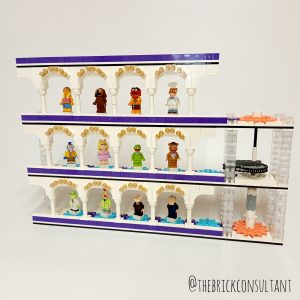 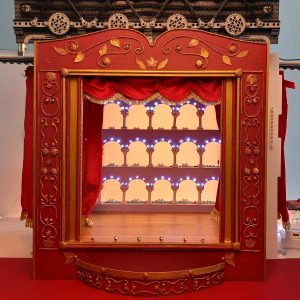 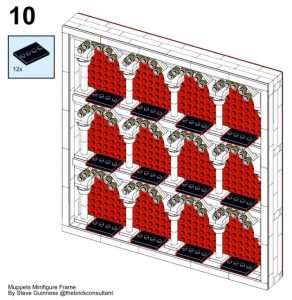